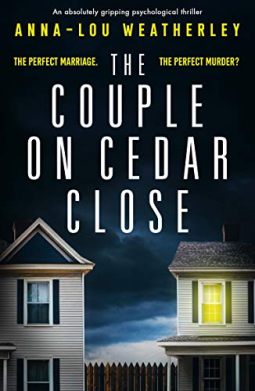 Cedar Close had always been a peaceful, fun place to live where the neighbours look after each other and nothing bad ever happened apart from a little gossip.  That is until Robert Mills is found murdered in the guest bedroom of his house even though he no longer lives there with his wife, Laurie.

The couple had moved into Cedar Close to be opposite Laurie’s best friend, Monica after ‘the accident’ which is detailed later in the story.  They had seemed a loving couple until the annual street barbecue where Laurie confronts her husband about having an affair.

Laurie wakes in the bed of the guest room to find herself covered in blood, husband dead with his throat cut and she cannot remember anything about how she got there.  Everyone, apart from Detective Dan Riley, even Laurie at times, believes she is guilty.  As the story unfolds the twists and turns of Robert’s life and indiscretions is told, in the present and past.

The plot is constructed with precision and each character shows their true nature at times in a way that when the final scene is played it becomes clear.  I worked out some of the sub plots and twists but not all.  Absolutely riveting from start to finish.

Many thanks to NetGalley, Bookouture and Anna-Lou Weatherley for my ARC in return for my honest review.

A must read.  Highly recommended.