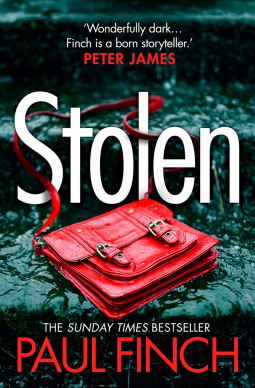 Many thanks to NetGalley, Avon Books UK and Paul Finch for my ARC of ‘The Stolen’.

I have read most of previous books by this author but essentially this a standalone so should not detract from the enjoyment if you haven’t read the previous two in this series.  All of his books have been brilliant and this did not disappoint.  It is based in Manchester and has Detective Constable Lucy Clayburn as the main character who is a gritty and determined and I warmed to her straight away.

She has recently found out that her father is one of the main men in ‘The Crew’, which is Manchester’s largest organised crime gang. When the story begins her bosses within the police force do not know this.  Knowing this could cause issues both for her career and her father’s position so they have both kept it quiet so far.

The novel opens with Lucy and her colleagues taking down a gang who are involved in dog fighting and some of the descriptions are horrific, so animal lovers may find this part really stressful.  I did.  Her next case involves trying to find people who appear to be going missing without trace but no bodies are turning up.  As the case escalates Lucy finds herself more involved with her father again and begins to realise that she may need to come clean to the force sooner rather than later, especially when she is put on guard to look after him when he has been shot.

This is a fast paced thriller with an unusual story line encompassing many twists and turns.  It is deep and dark and Paul Finch takes the subject matters head on without hiding anything.  I thoroughly enjoyed the dialogues and the fact that the author was willing to describe even the most awful scenes.