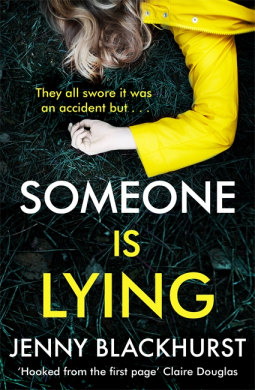 I have read all of Jenny Blackhurst’s novels and enjoyed each and every one.

‘Someone is Lying’ is no different.  Another five stars and I’m looking forward to more please.

It is a standalone thriller centered on a prestigious gated community, Severn Oaks, in Cheshire.  All the residents stick together although there is an inner group who attract all the attention and hold all of the parties.

At one such party, Halloween, the year before the novel starts one resident, Erica, falls from the tree house at the celebrity couple’s residence, Karla and Marcus Kaplan.  Erica was married to Jack and they had two children. Her husband has been left to look after them when the police investigation is closed citing an accident due to too much alcohol.

The inner sanctum of the residents comprises of Karla and Marcus Kaplan, Felicity Goldman, Peter and Mary-Beth King and Miranda and Alex Davenport and Jack along with all the children.  Out of the blue an announcement is made on Facebook that Erica was murdered, and all will be revealed in six podcasts.  This is from somebody called Andy Noon. They all huddle around the computer to listen to the Podcast which begins to let out secrets that each of them has tried to keep hidden and uses quotes from Erica’s journal which nobody, including her best friend Mary-Beth knew about.

The story is cleverly plotted with numerous twists and dark reveals. Gradually we learn about the backgrounds of each person and the lies they have all told about the night of the ‘accident’ and how this opens a different perspective on the events each time another lie is revealed.

A couple of the characters I didn’t warm to but, overall, I think I saw similarities to a few people I have met.