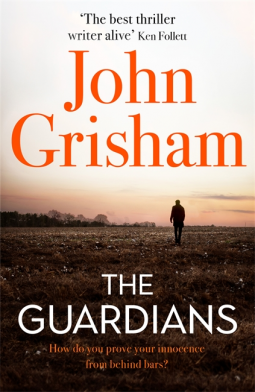 I have read numerous novels by John Grisham and they do not let me down.  His writing is fluid and keeps the reader engrossed even with difficult and complex legal issues.

‘The Guardians’ centres on ‘Post’.  He is one of the individuals who make it their vocation to free those who have been convicted of crimes and are serving long sentences with one on death row.  The business is non-profit making and those involved are larger than life.

As usual there are points of law, which the author manages to explain succinctly in language I could relate to.  Following the cases as they progress I became desperate for the release of those incarcerated.  It became clear that the legal system in the US had ben twisted in favour of law enforcement during the time theses individuals were found guilty.

There was one particular scene where I was laughing out loud and it doesn’t cease to amaze me how John Grisham can bring a scene to life so easily.

Thank you to NetGalley, Hodder & Stoughton and John Grisham for my ARC in return for my honest review.