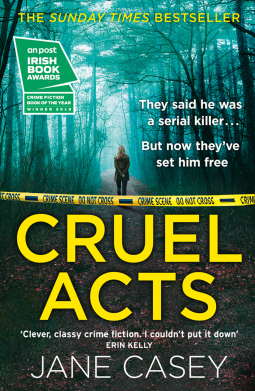 DS Maeve Kerrigan and DI Josh Derwent team up for the eighth book in this series by Jane Casey and ‘Cruel Acts’ is a storming read.  Maeve and Josh work well together and their ‘relationship’ and characters add to the dynamics of the writing and storyline.

This time they are both assigned to the case of Leo Stone who has already been convicted of killing two women and sent to prison for life.  However, a juror reveals that the rules were broken in the jury room so a retrial is needed.  The case needs to be investigated from the beginning and Maeve and Josh set about the task, finind that another woman had disappeared around the same time but never been found.

As soon as Stone is released from prison a woman disappears and he immediately becomes a suspect but all is not as it seems.  As the story is told through Maeve it becomes clear who she feels is guilty and the fast-paced nature of the novel kept me on the edge of my seat.

I love the min characters and Maeve’s complicated personal life as well as the intricacies of plot and possible murderers. Another five-star read from this author.

Many thanks to NetGalley, HarperCollins UK, HarperFiction and Jane Casey for my ARC in return for my honest review.