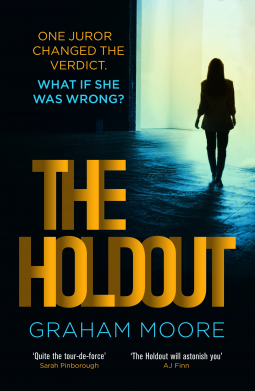 This is the first time I have read Graham Moore and I suspect I will be seeking out other novels by this author as it was a brilliant read.

‘The Holdout’ follows the lives of a jury which was involved in acquitting a man accused of murder ten years before against the belief of the general public at the time.  Somehow the names of the jurors had been made known and they spent several months sequestrated.  Maya appeared to be the one who persuaded the rest of the jurors that Bobby Nock, a black man, was innocent of the murder of Jessica Silver, a young while girl who was the daughter of a rich local businessman.

A ten-year anniversary meeting is arranged by a television network and Rick, the juror who had a book published condemning Maya, is found murdered in Maya’s hotel room.  As the story unfolds with the narrative switching from ten years ago to present day the reader learns secrets and lies of those involved on the jury as well as others around.

Many thanks to NetGalley, Orion Publishing Group and Graham Moore for my ARC in return for my honest review.