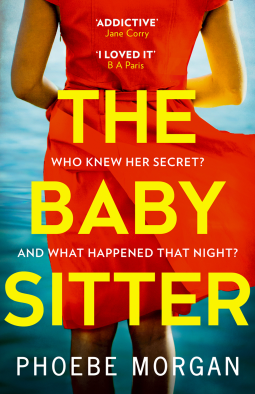 I must confess I am a huge fan of Phoebe Morgan, having read all of her previous novels.  ‘The Baby Sitter’ was amazingly good and beautifully written and I couldn’t put it down.

Caroline Harvey was found dead in Suffolk by one of  the parents of the baby, Eve, she was looking after for the evening.  Caroline’s body was draped over Eve’s cot but there was no sign of the baby who seemed to have vanished.  Different aspects of the scene leave the Suffolk police confused.

A few days later Callum Dillon, a TV executive, is arrested while on holiday in his sister-in-law’s luxurious French villa where he is staying with his wife, Siobhan, daughter, Emma and sister-in-law.  He had been having an affair with Caroline and had left the country the day after the murder had taken place.  According to him the affair was over.  Although a huge possibility for the murder there was no known reason he would kidnap the baby.

Did Siobhan know about the affair?  Why did Eve’s parents leave their daughter in the care of somebody they didn’t know that well?

As the storyline unfolded the web of intrigue grew with well-defined characters and exquisitely constructed twists and turns in every page.  I devoured this in one day as I was so engrossed in the plot and characters.

Many thanks to NetGalley, HQ,General Fiction (Adult) and Phoebe Morgan for my ARC in return for my honest review.