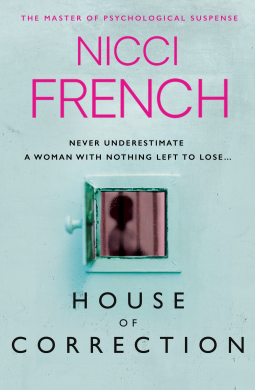 I have read most of the novels by Nicci French and am trying to catch up on those I have missed.  This is another gem.  I devoured this in less than 24 hours and thoroughly enjoyed it.

The novel begins when we learn that Tabitha is on remand for the murder of Stuart, her neighbour and former teacher whose body was found in her garden shed.  Tabitha had returned to the small village, Okeham, she grew up in even though she never thought she would. Okeham is close to the sea and there is only one road in and out with everybody knowing everybody else’s business.

The investigating officers view this as a ‘slam dunk’ and it appears as if everybody believes her guilty, even her solicitor who suggests she should plead guilty to manslaughter due to diminished responsibility, having suffered mental illness throughout her life.

She fires her solicitor and decides to represent herself unaware about how much evidence she will have to sift through.  She uses her former cellmate, Michaela, to assist her as her ‘McKenzie friend’.

As the story line twists and turns bringing out a variety of secrets, lies and horrors the reader is given an insight into small village life and the underhand behaviour of people.

Thank you to NetGalley, Simon and Schuster UK and Nicci French for my ARC in return for my honest review.

Another must read, highly recommended.